Saturday, August 6, 2022 is the official release date for Sienna Santerre's novel of three young women in Sixties Florida, ‘One Christmas in the Sun.’ This is the sequel to ‘One Summer in the Sun’ (also available, of course!).

These are the links for ‘One Christmas in the Sun’ at Amazon:

The print edition is (in theory, anyway) available ‘everywhere,’ but you may also purchase it at the Arachis Press store: https://www.lulu.com/shop/sienna-santerre/one-christmas-in-the-sun/paperback/product-dwz4z9.html

or if you prefer a PDF: https://www.lulu.com/shop/sienna-santerre/one-christmas-in-the-sun/ebook/product-87y5m5.html

or maybe an EPUB: https://www.lulu.com/shop/sienna-santerre/one-christmas-in-the-sun/ebook/product-pq5nd7.html

or just browse all the books at the AP store: http://www.lulu.com/spotlight/arachispress

And if you’d like to stop by the Sienna Santerre GoodReads page and perhaps leave a review: https://www.goodreads.com/author/show/22034700.Sienna_Santerre

Posted by Peanut Road at 2:59 AM No comments:

The Plain of Silver Release

This weekend marks the release of Stephen Brooke's new fantasy novel, THE PLAIN OF SILVER. This is the first book of 'Destiny's Daughter,' the sequel to the 'Donzalo's Destiny' sequence. Here's the blurb from the rear cover and advertising:

Their final battle had left her lost, near-broken. Could she find healing on the Plain of Silver, the mystic world where once she hid from his power and that of the dark god Asak? Could she at last find peace and, yes, love?

Now she learns a part of her father, possessed by Asak, is yet trapped in the god’s realm. Fachalana must come to terms with her own powers, to first make herself whole and then save what remains of Radal—and perhaps a kingdom.

Fachalana, sorceress and swordswoman, seeks her destiny in The Plain of Silver, the First Book of Destiny’s Daughter, the sequel to the epic Donzalo’s Destiny.

The Plain of Silver is available, of course, from our own store: https://www.lulu.com/spotlight/arachispress

Links for the editions at our store:

The Kindle version is here: https://www.amazon.com/gp/product/B0B3XNCL13

Posted by Peanut Road at 3:54 AM No comments:

This morning, we removed the very last of our EPUB offerings from distribution through Lulu. EPUBs will still be available at our Lulu store (as will be PDF) but they will no longer be sent to B&N, Amazon, etc. We were not happy with that model of distribution nor with their conversion to Kindle format.
Therefor, we now create dedicated Kindle books, uploaded directly to Amazon. It may take a few weeks yet till all of those are up and it might take even longer for the old versions to disappear from being listed at Amazon. Eventually, we may distribute EPUB directly to some other online retailers. And print is still distributed 'everywhere' by Lulu and almost certainly will continue to be. Sold through our store there, too.
Posted by Peanut Road at 7:25 AM No comments:

We made mention a few months back that one of our goals for this year—in addition to releasing new titles—was to get up new editions of pretty much all our books. Those that needed it, which means most of our novels. A few books were okay as were. We remain on schedule for this, not only getting new print versions out but also dedicated Kindle editions, as well as EPUB and PDF offerings at our own store.

The one possible exception may be the poetry titles. These are relatively low priority; we did get some new versions up but the rest can wait until we are finished with the novels. Most are not sold as ebooks, which simplifies matters, but we will get 'improved' free EPUB and PDF versions up at our site, in time.

In the meanwhile, THE PLAIN OF SILVER will be live in less that two weeks! And Sienna Santerre's novel ONE CHRISTMAS IN THE SUN is slotted for release on August 6. That remains on schedule too. Beyond that? You'll know when we do!

Posted by Peanut Road at 4:40 AM No comments:

A promo graphic for THE PLAIN OF SILVER. Coming in a little over a month! 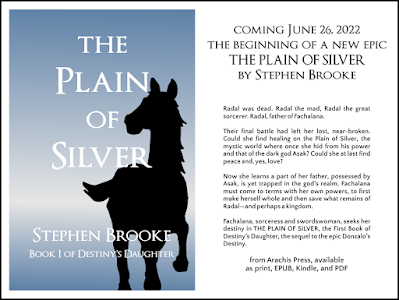 Posted by Peanut Road at 3:03 AM No comments:

For the typefaces used in the interior of our Arachis Press books, we are scrupulous about using only fonts for which we have a license. This means—in our case—the Bitstream typefaces licensed via our software and an assortment of ‘free’ fonts. There are free faces that are quite satisfactory and entirely professional; we have mentioned before the free pack donated by URW++ to the Ghostscript project and that one could do a perfectly good job with nothing else.

But then there are covers. If one converts ones cover file to a graphic (as we do—we upload high definition PNGs to our printer), one can get away with using unlicensed fonts. It is when we embed those typefaces in PDFs (or other file formats) that we run into legal questions.

Now we’ll admit that a small publisher (or self-publisher) probably won’t be called out for this but it is best to be safe. And legal! Therefor, we do keep a number of fonts on hand (or on computer, we should say) that we would not use for interior layout but can be handy for cover design. These are, of course, primarily ‘display’ fonts that one might not use for interior text anyway.

The self-publisher who uses Canva (or a similar cover generator) needn’t worry about any of that. Any licensing is taken care of already. Similarly, ebooks (other than PDFs) should not be problematic; we simply specify ‘serif’ for the type in our EPUBs and allow the reader to choose the font they prefer.

Incidentally, we should mention that Microsoft’s fonts are not free to use in your books, even if they are included in your copy of Windows. And Times New Roman should not be used in a commercial release without paying for it—though we don’t know why anyone would want to.

So we have used Dutch 766, Bitstream’s copy of Imprint, in our books but we would not use the Imprint MT Shadow that came with Windows. Not as part of the interior text. On a cover? Maybe someday, if it is needed.

Posted by Peanut Road at 9:42 AM No comments:

Today, April 21 2022 is the official release day for Stephen Brooke's new poetry collection, TICKING. Print copies may be purchased at our Arachis Press Store or at retailers around the web, Amazon included. As usual, ebooks (EPUB and PDF) are free here.

Further releases are coming this summer: the fantasy novel THE PLAIN OF SILVER by Stephen Brooke is due on June 26 and the Sienna Santerre's new novel of coming of age in southern Florida will appear on Aug 6.

Posted by Peanut Road at 2:56 AM No comments:

Email ThisBlogThis!Share to TwitterShare to FacebookShare to Pinterest
Labels: book release, poetry
Older Posts Home
Subscribe to: Posts (Atom)
Note: the 'Store' link above will take you to another site, our shop at Lulu.

presenting meaningful literature for all ages

ONE CHRISTMAS IN THE SUN