This is not exactly big news but we wished to mention that there is an Arachis Press board on Pinterest at: http://www.pinterest.com/farleagueranger/arachis-press/

New titles are in the works --- expect more from Arachis Press in the upcoming year!
Posted by Peanut Road at 7:26 AM No comments:

We would like to announce that we finally have our book list on line at our site (at http://www.insolentlad.com/apbooks.html ) with images, brief blurbs and 'buy' buttons. All eight current titles are up --- more to come, of course!

More information on Arachis Press, including submission standards and the like, should appear soon-ish, both at the site and here. Plans for our new magazine, too.
Posted by Peanut Road at 5:03 AM No comments:

Just a mention that the epub version of THE SONG OF THE SWORD will be delayed a bit before appearing at various outlets around the internet (Barnes and Noble, etc). It is available, however, from our own store.

There was a glitch in attaching the 'cover' to the text, which was apparently no fault of ours, though we should have noticed it in our downloaded 'proof' copy. Anyway, we have revised and republished and the new version appears to be properly done so we expect it to show up everywhere soon.
Posted by Peanut Road at 7:07 AM No comments:

The Song of the Sword Official Release

Today is the official release of THE SONG OF THE SWORD, the fantasy novel by Stephen Brooke and the first book of the Donzalo's Destiny series. Now available in print, epub and PDF at our 'spotlight' store, and ready for your seasonal shopping!

The epub version is also available through Barnes & Noble and Apple. Incidentally, we do NOT do Kindle and generally try to avoid dealing with Amazon altogether.

Also, we have taken care of a few small problems that arose in the printing of the poetry chapbook, RETELLINGS, so the print version is ready to order.
Posted by Peanut Road at 9:45 AM No comments:

Song of the Sword Trailer

We've put together a book trailer for the release of the new fantasy novel by Stephen Brooke, THE SONG OF THE SWORD. Yes, Stephen wrote the song. And yes, Stephen sings the song.

Posted by Peanut Road at 3:37 PM No comments:

Song of the Sword

Just for the fun of it, a blurb for the upcoming publication of THE SONG OF THE SWORD. Currently in rewrites and edit, expected to be available in time for Christmas shopping!
Posted by Peanut Road at 12:10 PM No comments:

The new and updated of our books is now available: http://insolentlad.com/files/apcat2013sep.pdf

All the titles are available at our store in print, and most as PDF and EPUB as well. Feel free to contact us with any questions.
Posted by Peanut Road at 10:12 AM No comments:

I just realized that this is the tenth anniversary of Arachis Press. In a sense, anyway — I self-published my first chapbook of poetry, ‘Pieces of the Moon,’ in 2003. At that time, I styled myself ‘Nihil Crocodile Press’ and continued to do so until I put out my second book, the YA novel ‘The Middle of Nowhere,’ some eight years later!

That first edition was not only self-published but also self-printed. A laser printer, good paper stock, and a long stapler are really all one needs to put out a quite decent-looking product. Distribution, however, is another matter which is why I switched to printing and selling through Lulu for the second edition in 2005.

So I’ll celebrate. Yay! Okay, that’s taken care of. Now back to business!

I’m working up a new catalog, reflecting the release of the latest book, ‘Retellings,’ and will have it on the site shortly. It might be time I adjusted some prices anyway and maybe even put out some revised editions (too many mistakes in both ‘Pieces of the Moon’ and ‘Dreamwinds.’).

And, of course, I continue to make attempts at more books. As I mentioned a while back, I’m open to working with other authors, but I do have projects of my own in progress. Maybe I’ll finally get that fantasy novel finished.

That would be ‘The Song of the Sword.’ I have decided to retain that title for the first ‘book’ of ‘Donzalo’s Destiny,’ which should consist of two novella-length parts. The first of which is long finished and well-polished — I considered releasing it on its own as a 22,000 word ebook but think I will wait.

Here is a mock-up of a possible cover. I like simple and (I hope) classy presentations. 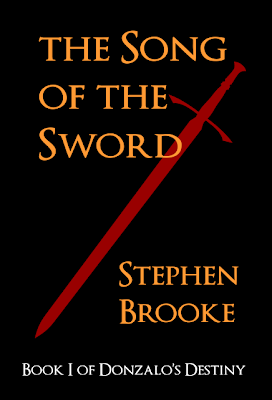 Posted by Peanut Road at 7:56 AM No comments:

The new collection of poems and vignettes by Stephen Brooke, RETELLINGS, is now available in print, EPUB, and PDF from our store: http://www.lulu.com/spotlight/arachispress

The EPUB edition should show up in a few days at Barnes & Noble and at Apple.

Next in the queue? Possibly a new picture book for the kiddies.

The newly revised color version of A MOUSE IS IN THE HOUSE is now available from Arachis Press. The price has gone up, inevitably, with the switch to color printing, but we are offering it with a rather slim profit margin at $12.99.

We decided to no longer offer a PDF version for sale but those who purchased the black and white MOUSE are entitled to a free download of this color edition. Write us for the link.

So what is next from Arachis Press? Maybe AWFUL ALVIN, our other picture book project that has been in the works for quite a while. More poetry is always a possibility, too!
Posted by Peanut Road at 10:34 AM No comments:

Our children's picture book, A MOUSE IS IN THE HOUSE (written and illustrated by Stephen Brooke), is going to be out of print for a short while, as our printer doesn't want to work with the 8.5 by 8.5 format anymore. So we will shrink it to 7.5, which should make it less expensive and may look better, too. As soon as we put it out, we realized a smaller size might have been preferable and now we've been forced to actually use it!

We do have a few copies on hand here if anyone just have to have one!

Addendum, a tad later: There was some miscommunication involved here. Going to 7.5 is altogether out and so is switching to a perfect-bound format --- not enough pages in MOUSE to make it work. Our only option is to go to color for the book. Is it worth it to colorize all those pen and ink drawings? We'll see.
Posted by Peanut Road at 9:57 AM No comments:

A quick announcement here that we are 'laying the foundations' of a new literary magazine (online and probably non-paying, at least at first) to be titled The Arachis Review. First issue may appear, perhaps, in early 2014 and we're thinking twice a year after that---as we did with the short-lived Peripheral Vision magazine.

There is a lot to think about and a lot to do before this magazine will happen. I will say that our emphasis (as with PV) may be towards a Stuckist/Remodernist tone. Or maybe not. At any rate, give some thought to work you might submit. We will be interested in reviews (we may start publishing them separately, first), essays, short fiction, poetry and all the other usual suspects for this sort of thing.
Posted by Peanut Road at 3:15 PM No comments:

With sorrow, we must announce the passing of Mary Katherine Page Brooke, the subject of our retrospective book, 'The Art of K. Page Brooke.' We are, however, pleased that we were able to publish the book while she was still with us and able to enjoy looking through it.

Rest in peace, Mary, and be sure to set up your easel and paint some landscapes of Heaven.
Posted by Peanut Road at 8:22 AM No comments:

We have decided to finally make Kindle versions available of some of our titles, starting with 'The Middle of Nowhere,' the Young Adult title by Stephen Brooke. It may be found HERE.

We have priced it at 2.99. The EPUB version is still available both at our own store and at iTunes and Barnes & Noble. Not to mention the print version, of course!

A NOTE, Aug 31, 2013: We have withdrawn all our books from Amazon and the Kindle format.  They will, of course, remain on sale in print and EPUB (and some as PDF) at our other outlets.
Posted by Peanut Road at 5:16 AM No comments:

Email ThisBlogThis!Share to TwitterShare to FacebookShare to Pinterest
Labels: ebook

The March 2013 catalog of books from The Arachis Press is now available for download. It contains information on all six of our current titles.

http://insolentlad.com/files/apcat2013mar.pdf
Posted by Peanut Road at 6:55 AM No comments:

We've put together a simple little video to accompany our children's picture book, 'A Mouse Is In The House.'


This is a shortened version of the song by Stephen Brooke that was the original impetus for the creation of the book.
Posted by Peanut Road at 2:55 PM No comments:

We are finalizing 'The Art of K. Page Brooke' and do expect it to be available by the end of January. With this sort of project, we are definitely taking our time. In the mean time, we have put a page at our site with some of the art that will be in the book. In higher resolution, of course! That may be found at: www.insolentlad.com/kpagebrooke.html

This book is essentially a labor of love for us and also an opportunity to expand our catalog. It will class us up a bit! ;)
Posted by Peanut Road at 12:16 PM No comments:

presenting meaningful literature for all ages